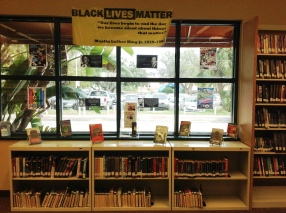 “Our lives begin to end the day we become silent about things that matter.” – Martin Luther King Jr.

In the wake of the events in Ferguson and New York, when January rolled around I knew I had to do something. As a teen librarian, I want to inspire my teens to slip into the shoes of others. I want them to feel empathy, to stand up for their fellow citizens, and make a difference in our community.

Add to that the fact Martin Luther King day was January 19th, and I knew right away what I needed to do: create a book display featuring African-American protagonists.

I specifically zeroed-in on books that dealt with issues of social justice: equality, poverty, GLBT issues. I wanted books that, just like the lives of their protagonists, mattered. I also made mini posters featuring quotes by famous African Americans – Langston Hughes, Maya Angelou, Harriet Tubman, Martin Luther King Jr., etc – and put them in the windows.

I’m posting the titles that I included in my display below. Since February is African-American history month, I challenge you to read as many of these titles as you can (and encourage your teens to do the same). The only way to combat ignorance is through education, and books like these can be powerful tools.

How it Went Down by Kekla Magoon

If You Come Softly by Jacqueline Woodson

The House You Pass on the Way by Jacqueline Woodson

Know of any titles I should’ve added? Please post them below. Let’s make this an ongoing conversation. Black lives matter.