It’s here! The launch day of Caminar! To celebrate, I’m interviewing the lovely Skila Brown! Skila is a fellow alumna of Vermont College of Fine Arts and Caminar is her debut novel.

We’ll also be giving away a signed copy of her book to one lucky commenter! So read on and leave a thoughtful response in the next 24 hours for a chance to win!

Set in 1981 Guatemala, a lyrical debut novel tells the powerful tale of a boy who must decide what it means to be a man during a time of war.

“Carlos knows that when the soldiers arrive with warnings about the Communist rebels, it is time to be a man and defend the village, keep everyone safe. But Mama tells him not yet—he’s still her quiet moonfaced boy. The soldiers laugh at the villagers, and before they move on, a neighbor is found dangling from a tree, a sign on his neck: Communist.

Mama tells Carlos to run and hide, then try to find her. . . . Numb and alone, he must join a band of guerillas as they trek to the top of the mountain where Carlos’s abuela lives. Will he be in time, and brave enough, to warn them about the soldiers? What will he do then? A novel in verse inspired by actual events during Guatemala’s civil war, Caminar is the moving story of a boy who loses nearly everything before discovering who he really is.”

Powerful stuff, to say the least. And now, on to Skila! 🙂

What inspired you to write Caminar?

“After over a decade of researching the story of Guatemala’s violent conflict, the story of Carlos was just bursting to come out. I didn’t set out to write it, but found I couldn’t write anything else until I did. I was certainly inspired by actual massacres perpetrated by the army in Guatemala and the accounts of survivors, especially children, from that period. I think the story of survival is a universal story that every reader, no matter the age or background, can identify with.”

What made you decide to write the novel in verse instead of prose?  How did this decision affect your writing process?

“Caminar came to me as poems. I assumed I’d be taking those poems and turning them into prose, but the poems just kept coming and they seemed to be a good fit. My drafting process quickly became: Hand-write the beginnings of a poem in a notebook. Move on and do the same thing with other poems. Return to notebook and reread. Find one poem to further develop. Keep working on it until I can see the shape of the poem in my head. Type it into the computer. And then repeat. Repeat. Repeat. I write out of order which can be frustrating at times and messy, but also refreshing and fun.”

Caminar is written from the prospective of Carlos: a Guatemalan boy. Did you experience any challenges while writing across gender and culture?

“Oh, yes. I don’t know how I could answer this question succinctly and do it justice, but by far this was my biggest struggle. First with the issue of whether or not I should even be telling this story and then later with making sure I was telling it in a way that was respectful and of service to the culture it represents. It was something I thought about at every step of the process, with every word I wrote, and with every revision I did. It’s something I think about still.” 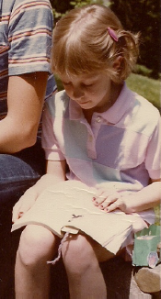 Since it’s set during the Guatemalan Civil War, what sort of research did you do for Caminar?

“I’ve read numerous books, both secondary accounts and primary ones, written by survivors of the violence, and perused many news articles. I spoke with many people who lived through that period of turmoil, and I had the good fortune to have some of them read my story and offer up a critique on the cultural nuances of it. Living in Guatemala for a bit allowed me the chance to tangibly experience Carlos’s setting in a way that I otherwise wouldn’t have been able to do.”

How did you maintain the balance between realistically portraying Carlos’ wartime experiences without overwhelming younger readers?

“This was certainly a challenge. I had a few descriptive lines about the violence that were hard to let go of, but I knew they would be too much for the youngest of readers. I tried to really make use of white space and metaphors instead of spelling things out with sharp, concrete words. Poetry, I think, also allows readers to digest the story at a level that’s appropriate for them. A younger reader will get the gist of what’s happening without extreme detail, while teens and adult readers can read between the lines and really absorb the tragedy that unfolded.”

What advice do you have for aspiring writers of historical and/or multicultural fiction?

“Researching historical fiction can sometimes be overwhelming. How do you know what to read? When to start writing? I think a good rule of thumb is to start with secondary sources, which can give you a good overview of the time period and also provide a framework for any controversies you’ll encounter among the research. Once you have an overview, dig right into primary accounts, whenever possible. Keep a journal and write down whatever details interest you. You don’t know what you’ll use at that point and it doesn’t matter. This is all really the brainstorming stage. After you have a story in your head and you can see it, you might be ready to write. But you’re definitely not done with research. You can keep your research going, even while you’re drafting, this time on a targeted level, looking for the specific details you need in a particular scene.”

If there’s one thing you’d like readers to take away from your novel, what would it be?

“Remembering is powerful. It can keep alive what others try to silence.”

Any new projects on the horizon?

“I just finished up another verse novel, also historical, this time YA, set in the 1840s. And I’m getting ready to dive into a new historical YA novel that I’ve been researching for several months. I don’t think this one will be in verse, so I’m excited to see how my writing process might be different.”

Many thanks to Skila for letting me interview her!  It was an absolute pleasure. Happy Book Birthday and best of luck on your continued writing journey.

Don’t forget to comment today for a chance to win a signed copy of Caminar. And, in case you don’t win, Skila’s novel can be purchased from:

10 thoughts on “Author Interview and Book Giveaway with Skila Brown”