I’m currently in the process of prepping for my Divergent Book Bash, which will be held March 15 (the weekend before the movie is released in theaters). I thought I’d give you a sneak peek of some of the things we’re doing. I’ll post more photos and details when I come up for air next week.

Obviously, one of the key parts of the Divergent series is figuring out your faction. So I thought it would be fun to divide the teens into one of the five groups. I made a print version of the Faction Quiz from divergentfans.com. Each student will take it when they enter to figure out what faction they’re in.

P.S. Forgive the “Abnegation” typo in the image. I promise I know how to spell it! 🙂

After they’ve been sorted (excuse the Harry Potter reference), each teen will go through the Choosing Ceremony. There, they will receive a button with their faction symbol after retrieving it from the appropriate bowl. I had the buttons custom made by wackybuttons.com for about $30.

I made sure to follow the book as closely as I could, modeling each bowl after the ones described in the actual text. Candor got glass beads,  Abnegation got pebbles, Dauntless got coals, and so on. 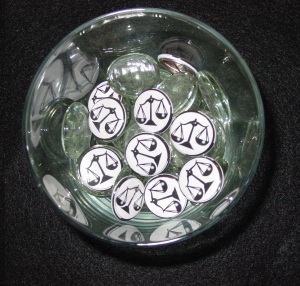 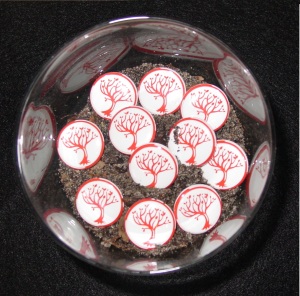 I’m really excited and I think the teens will get a kick out of it. Drop me a comment and let me know what faction you’re in! I’d love to hear from you!